After our visit to Tjørnuvík we made our way to the second largest city in the Faroe Islands, Klaksvik. We drove through the snow covered suburban streets on the way to the house we had booked on Airbnb. The hills of Klaksvik were lined by large modern family homes that overlooked the two inlets that lay on either side of the city. Candles and stars from Christmas were still in the windows of every house and the dim lights visible from the streets made us think about our own families and the families we wanted to have. The next day we were going to catch the morning ferry over to the island of Kalsoy, we planned to hike to Kallur Lighthouse and visit the seal woman statue. Over a few lagers we settled in for the night, talking about past times and memories, and where we would be if we weren’t here. 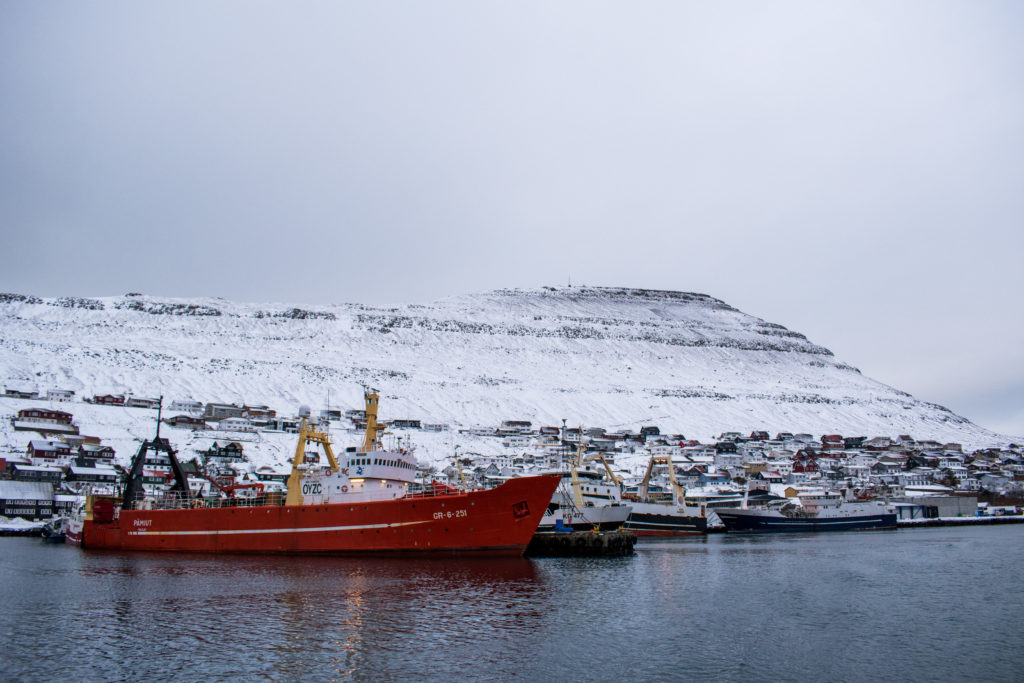 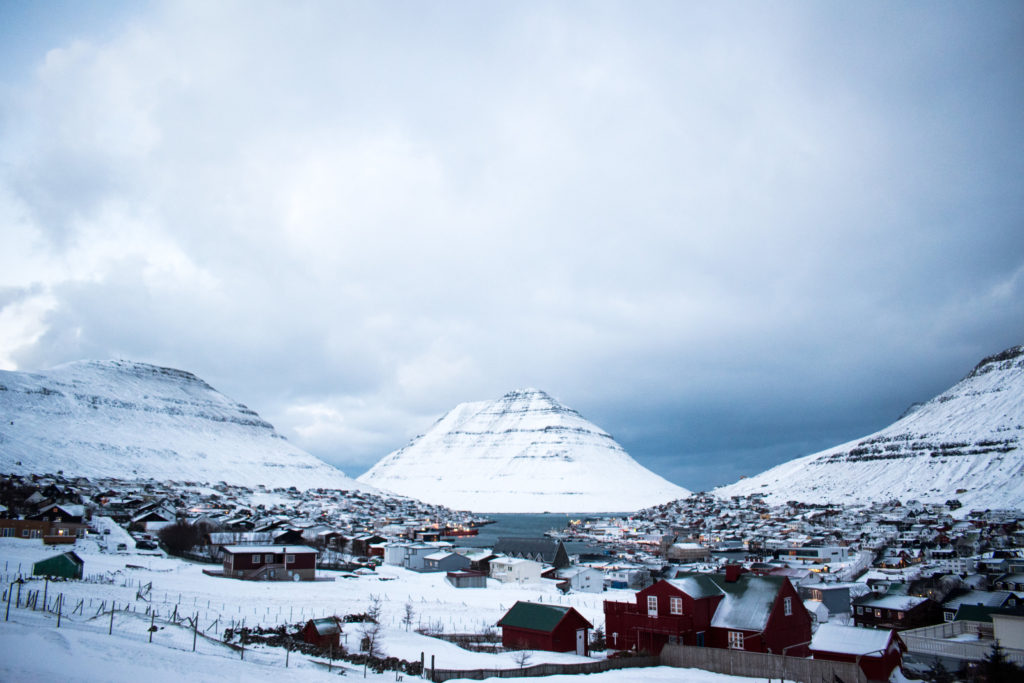 Daylight was only just beginning, we sat in the car waiting for the sailor to give us the signal to drive aboard the ferry. We were a little late and had missed buying any breakfast. A long hike lay ahead and we hoped that there was a shop open on the island. The engine of the ferry roared to life and we drove aboard. The sailor spoke a little English but gave us the number of someone on the island we could buy food from as he said no shops were open in winter. The ferry, ‘Sam’ gently rocked backed and forth as we made our way to Kalsoy. 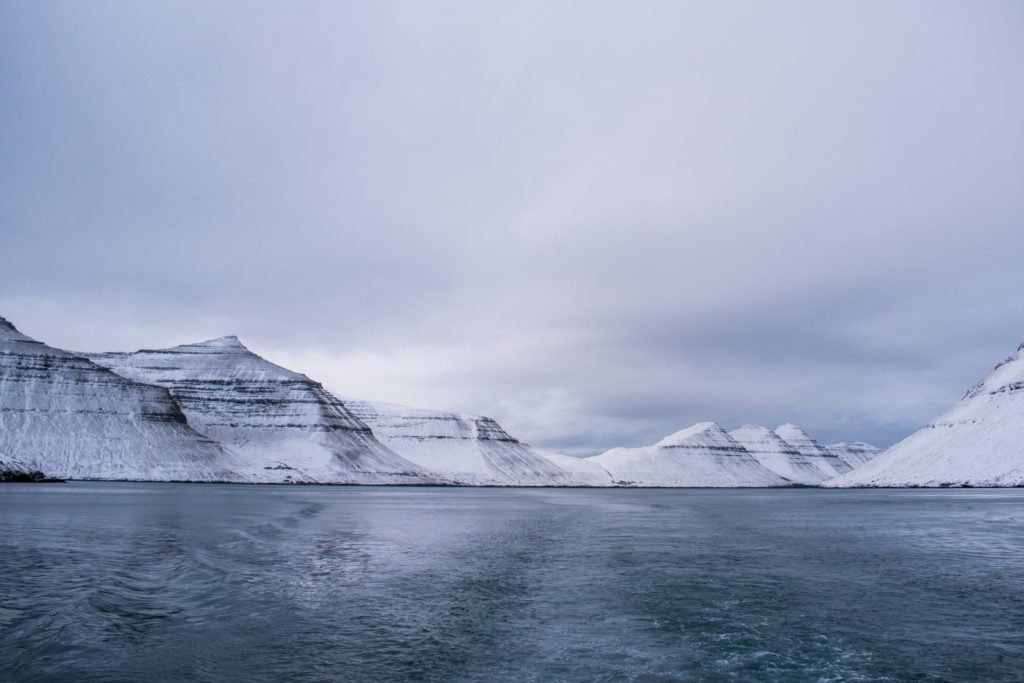 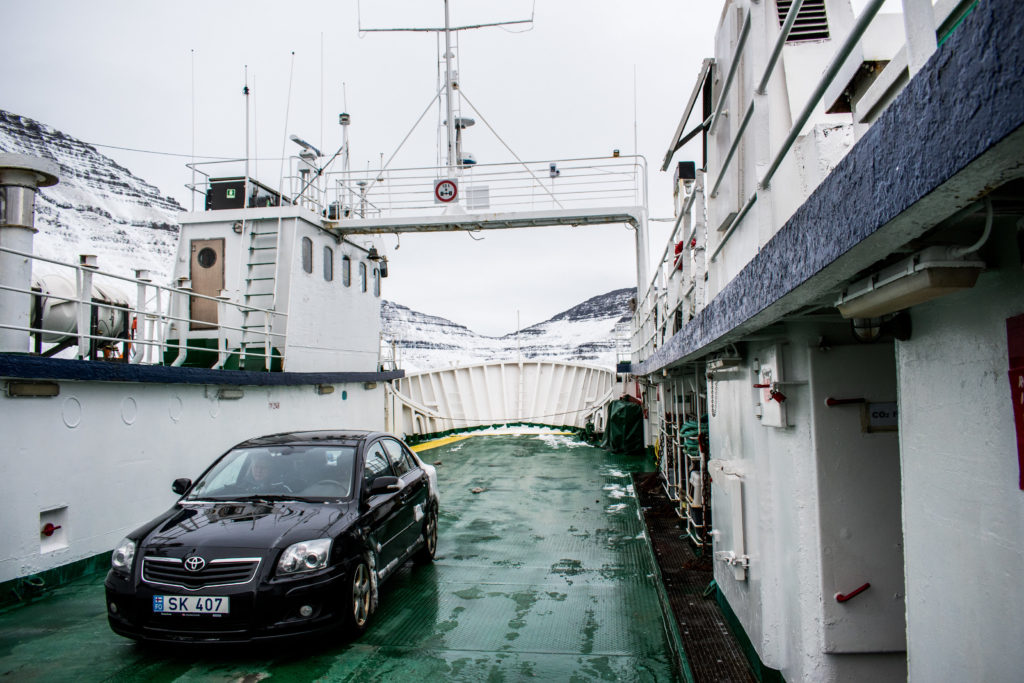 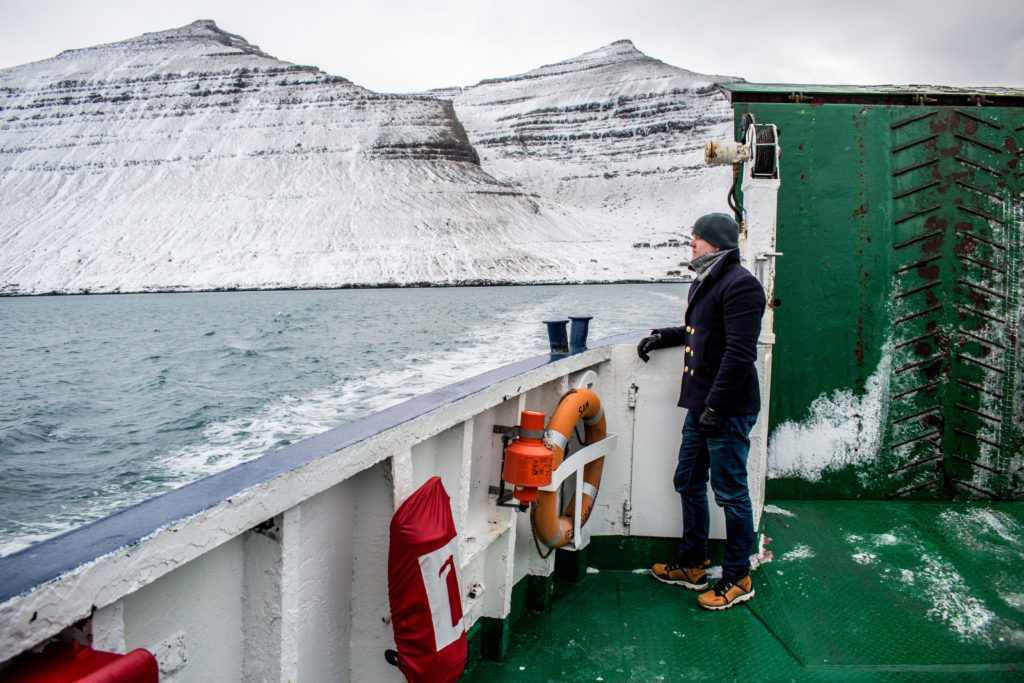 We left the ferry and slowly drove north to the village of Trøllanes. We passed great mountain peaks and sweeping views of the ocean and the adjacent island of Kunoy. The last stretch of road to Trøllanes required us to pass through a dark single lane tunnel 2 kilometres long. Every few hundred metres there were little inlets cut into the rock that you could pull into if another car approached.

After a cautious drive through the tunnel, we finally reached Trøllanes. It was a very small village of only a few houses and a small tourist centre with a toilet. We were here to hike to Kallur Lighthouse, one of the main hiking attractions of the Faroe Islands. A young farmer appeared in a blue truck and I waved him down. As the grass was still covered in snow we couldn’t see a track or path which would lead to the lighthouse. He pointed into the distance and told us to find a small red gate in the fence line and begin the hike there. We expressed our thanks and set off, walking past dozens of curious sheep. 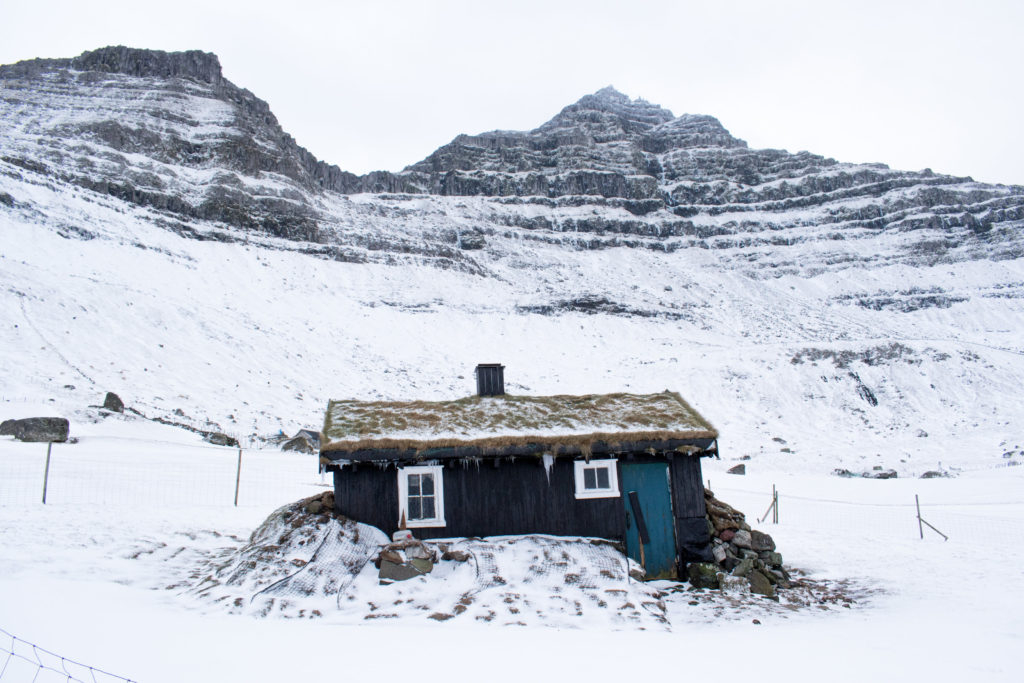 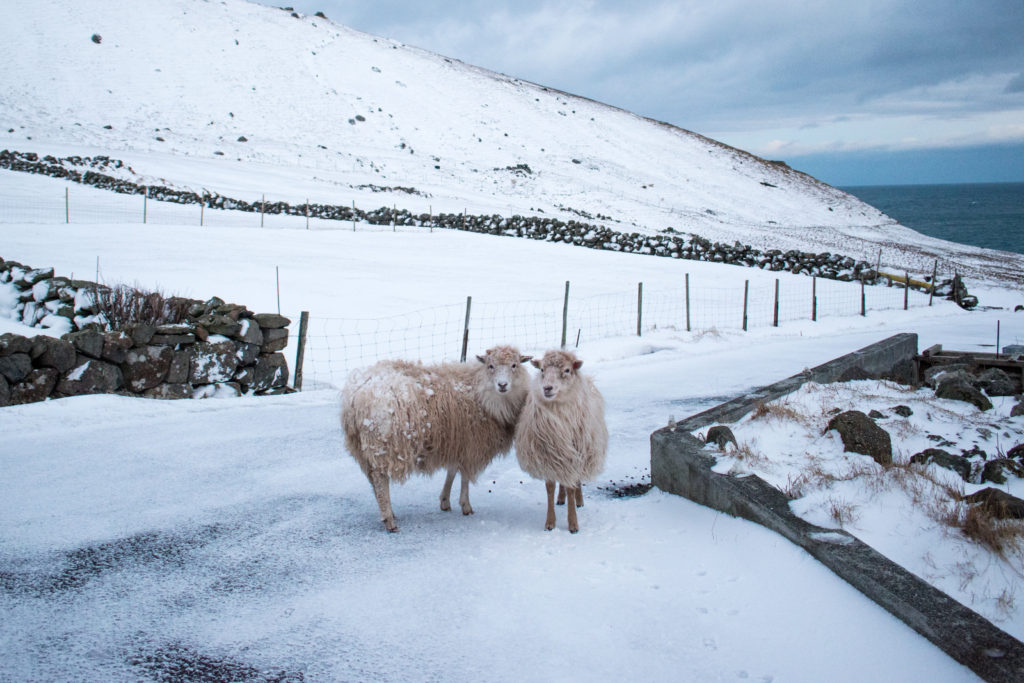 The hills were steep, and as we stopped to catch out breath, we admired the surroundings. The views were spectacular, a violent ocean moving about in the distance, surrounded by gigantic white peaks that suddenly drop into nothing. The sun tried to break through, but the sky stayed grey. At least it wasn’t windy, The Faroe Islands are famous for wind. Every crest we reached, we expected to see the lighthouse in the distance, but only another hill. We pushed on, exhausted but determined. The sheep were happy to have visitors, and looked on with encouragement. 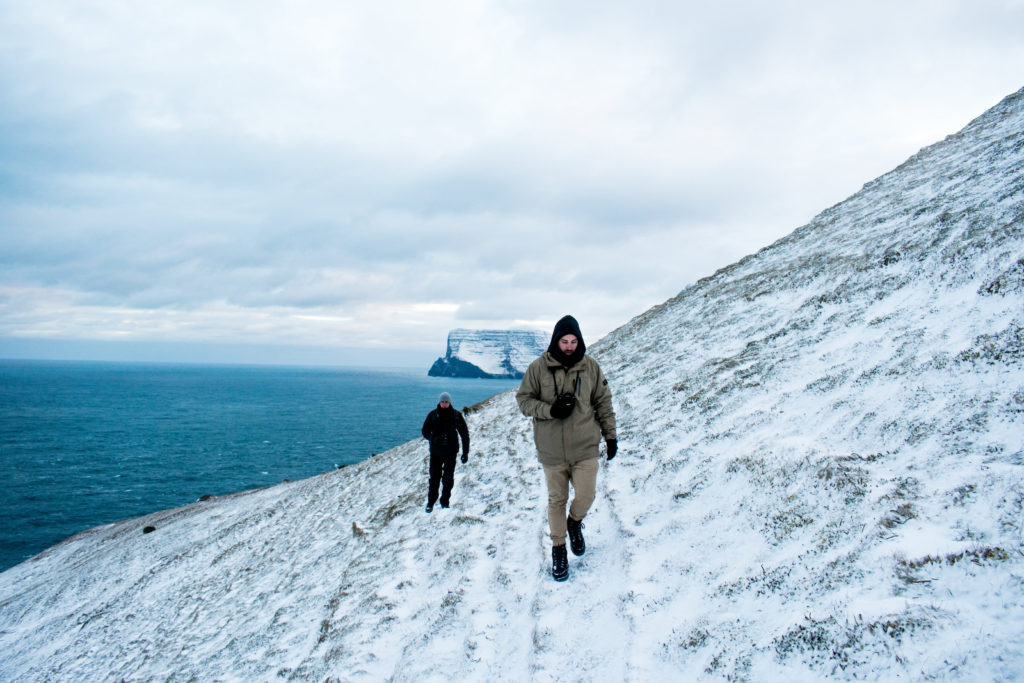 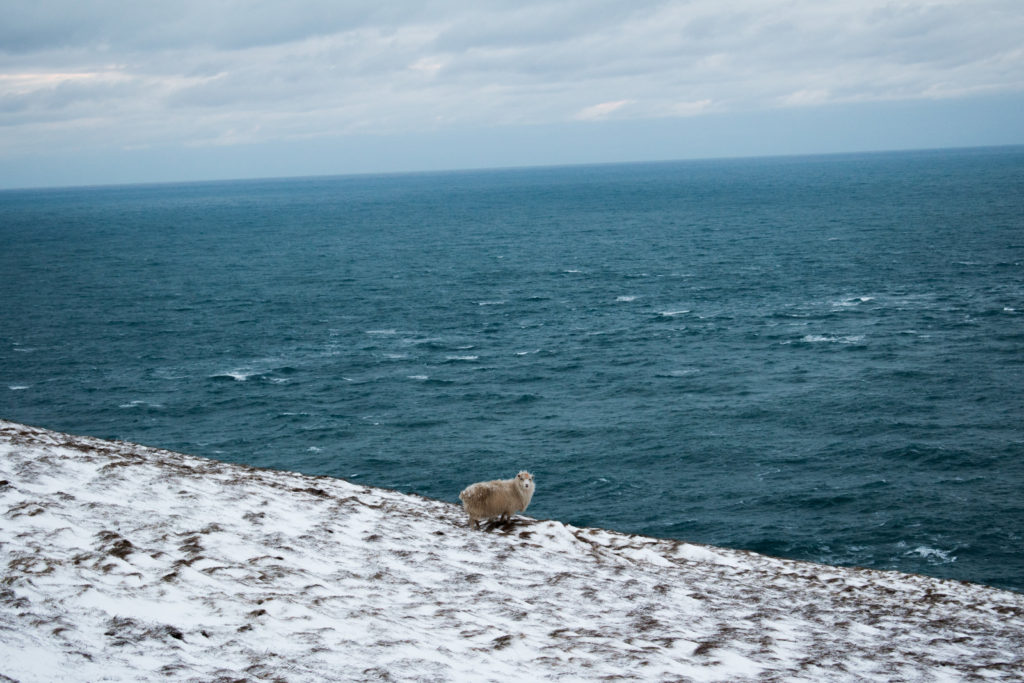 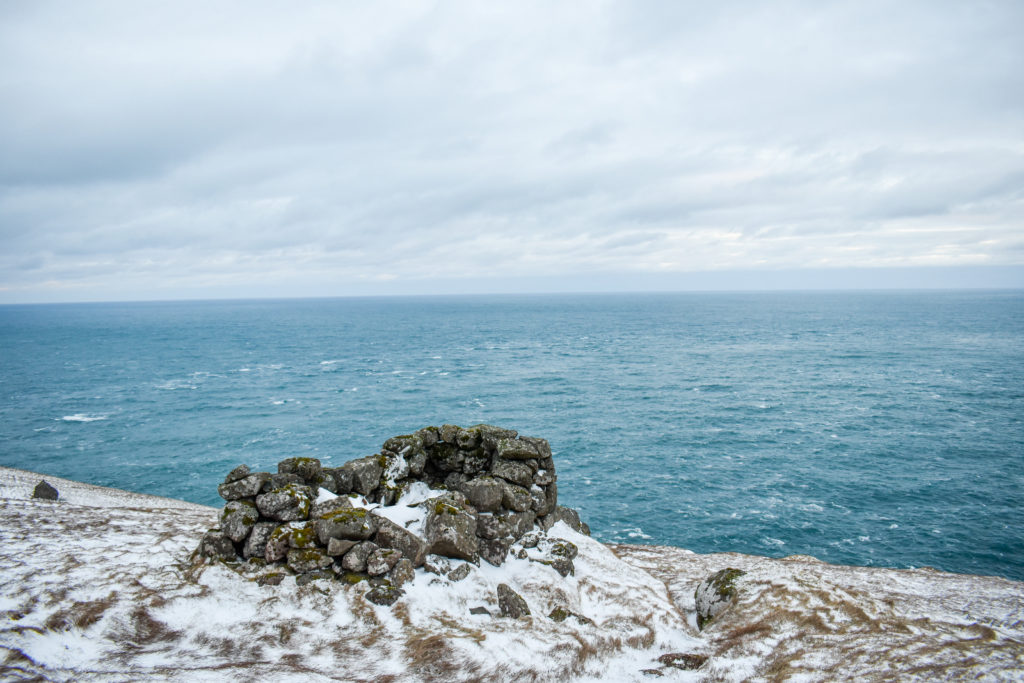 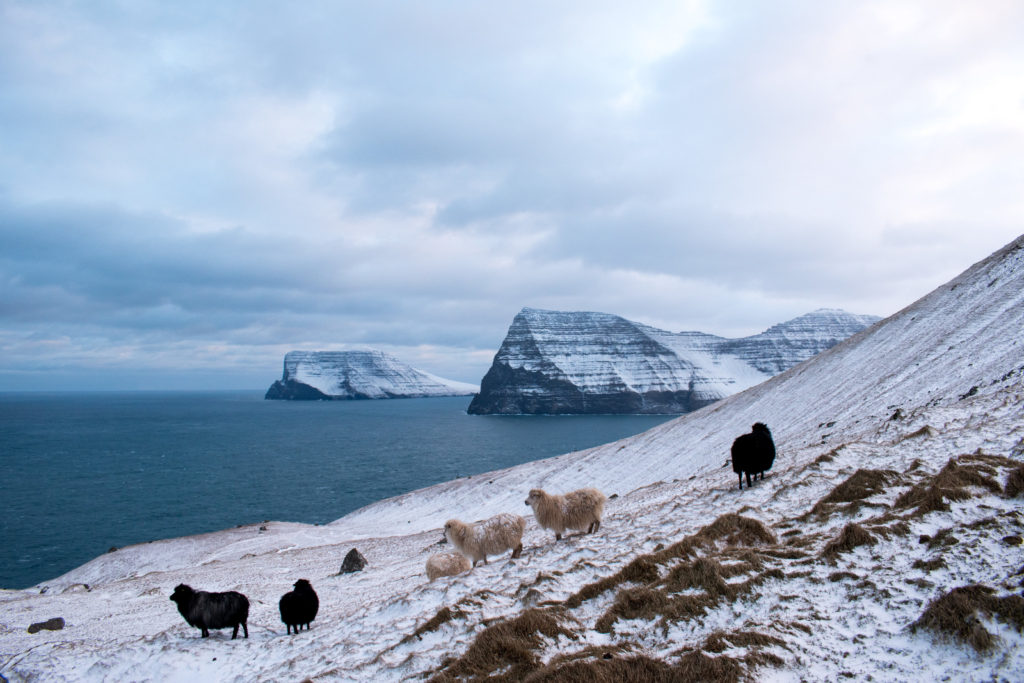 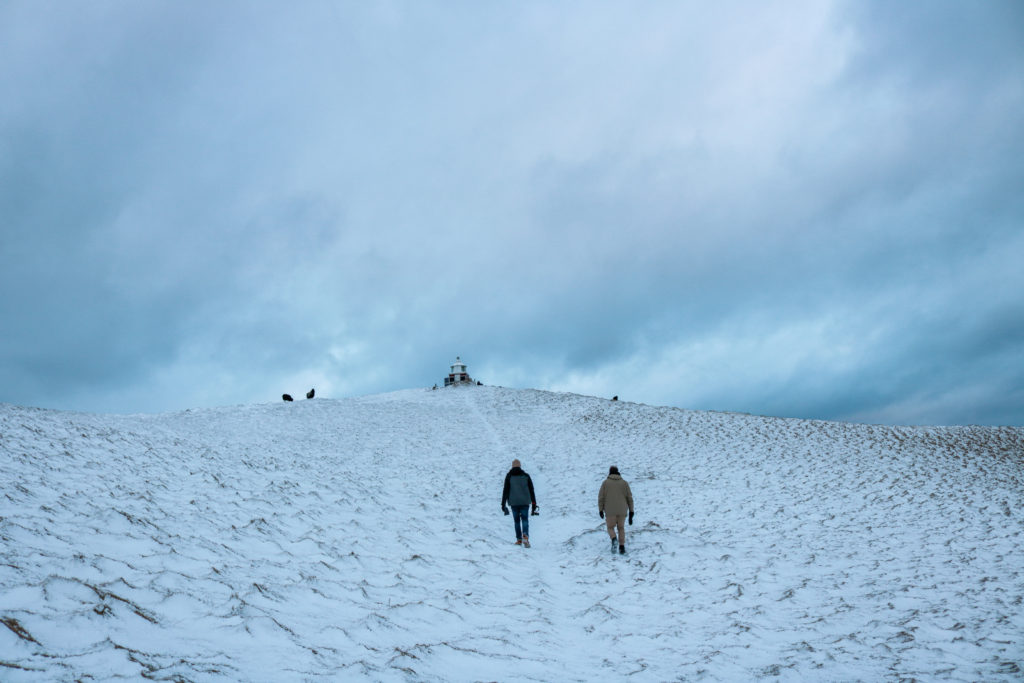 As we took our final steps toward the lighthouse, we became overwhelmed by glimpses of the most stunning panoramic views of the surrounding area. We stood there in awe, in complete silence. All we could hear were our own thoughts and the roaring of the ocean below. It simply seemed as if it were too breathtaking to be real. A sheer cliff face ran up to a higher peak behind the lighthouse and sheep dotted the landscape. 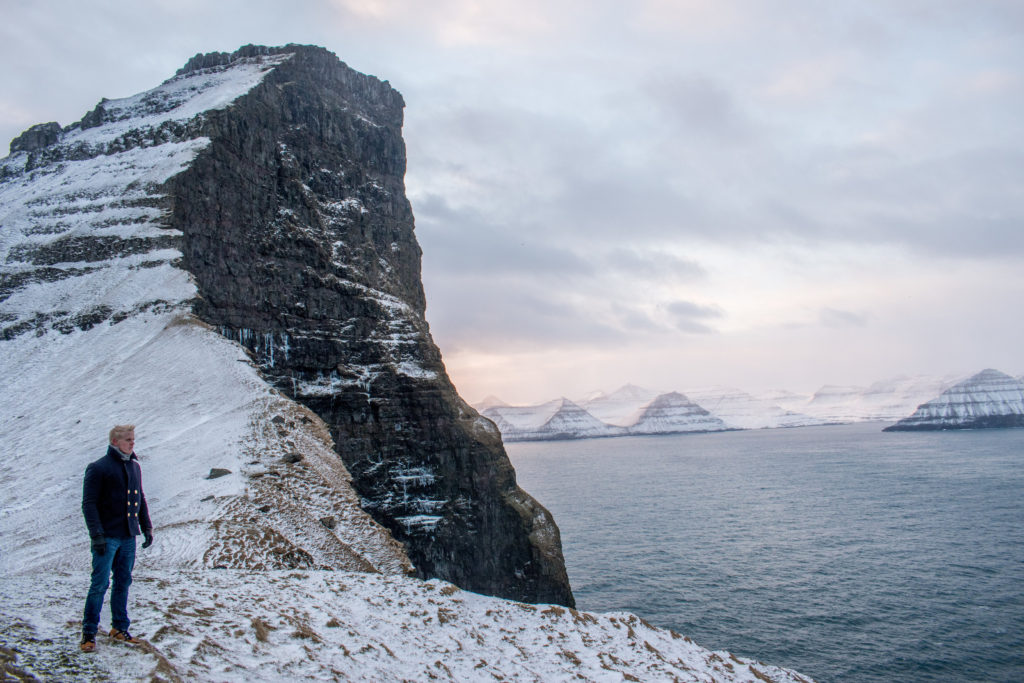 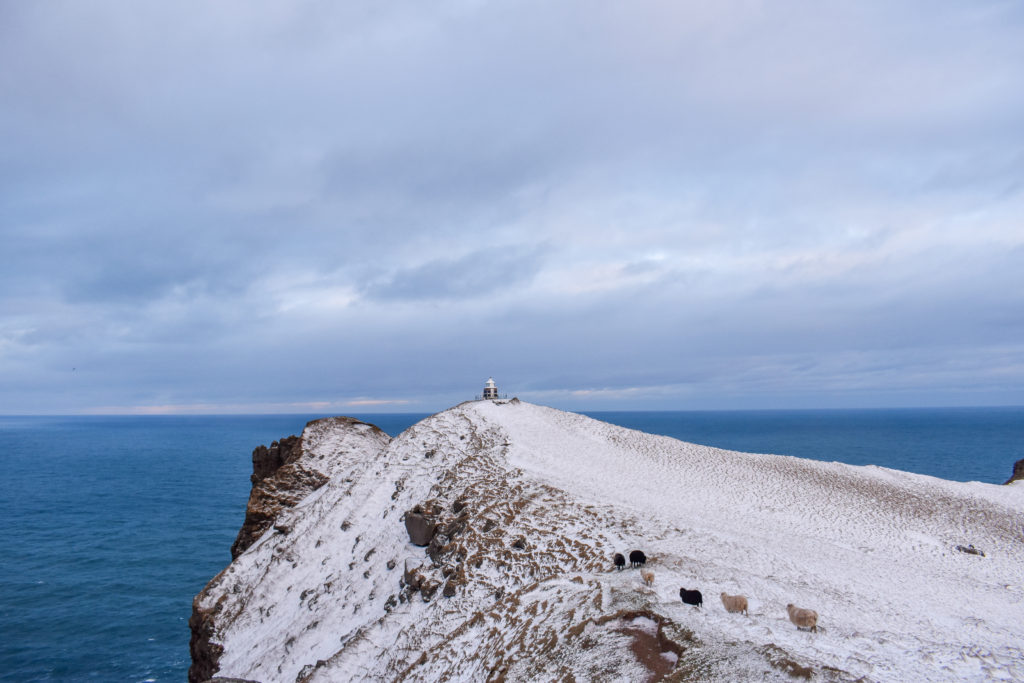 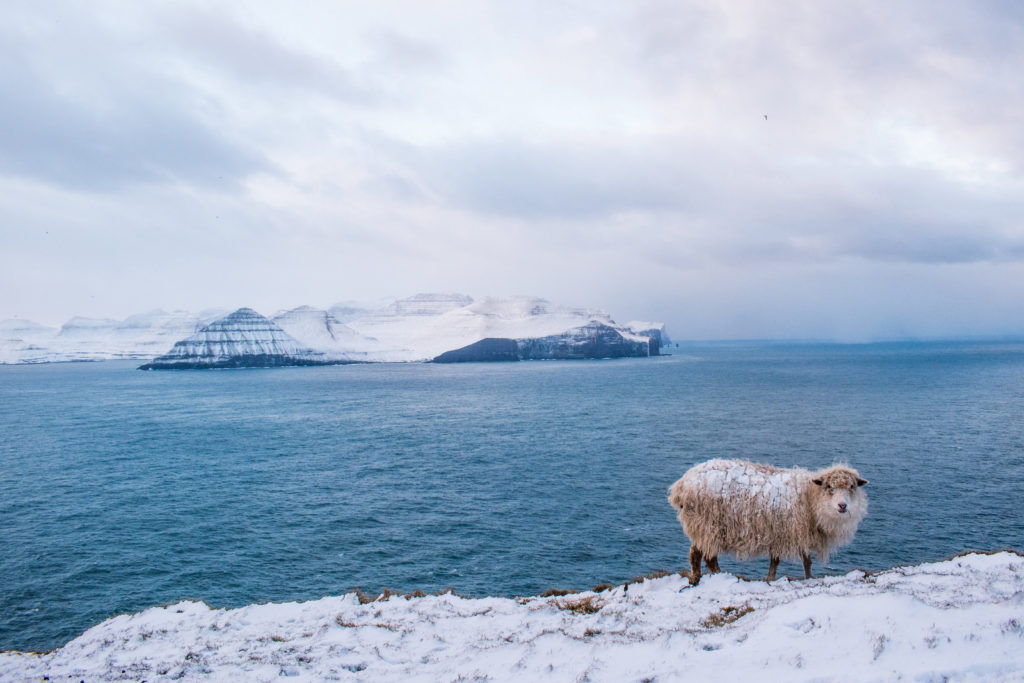 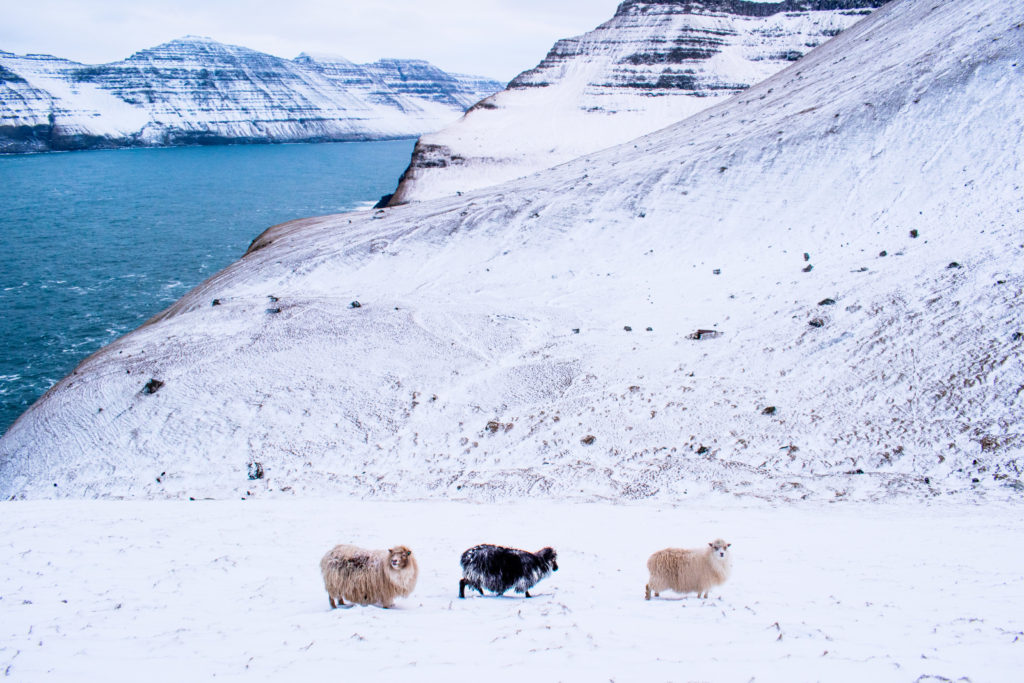 We noticed a lone figure off in the distance and made our way to a ridge line to the east, which would offer us a different side-on view of the lighthouse. The lone figure turned out to be a young local man. He wore wool covered leather boots and a blue windproof jacket. We shook hands and introduced ourselves. He was a shepherd from Trøllanes and told us that his family had been on the island for more than 400 years. He was in the middle of herding his sheep back to the village to feed them grass that he had harvested. He pointed to each of the clusters of sheep spread across the landscape and explained that if they grew up near a particular rock as a lamb, then they would always stay around that rock. We spoke about life on the island for about half an hour before wishing him farewell. One last glance at the lighthouse and we slowly made our way back to Trøllanes. 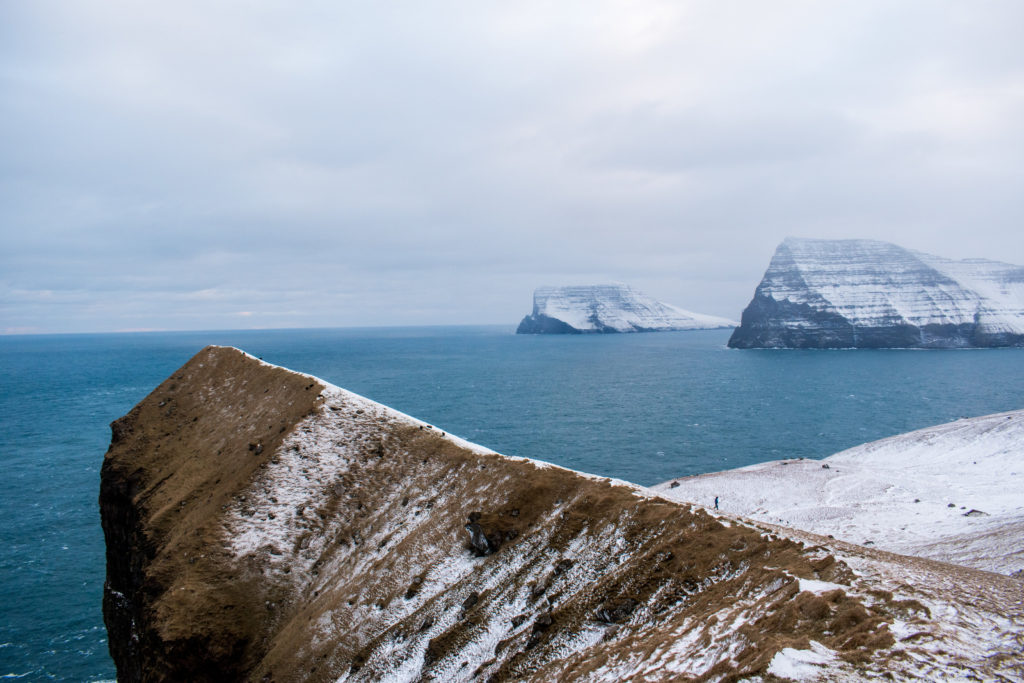 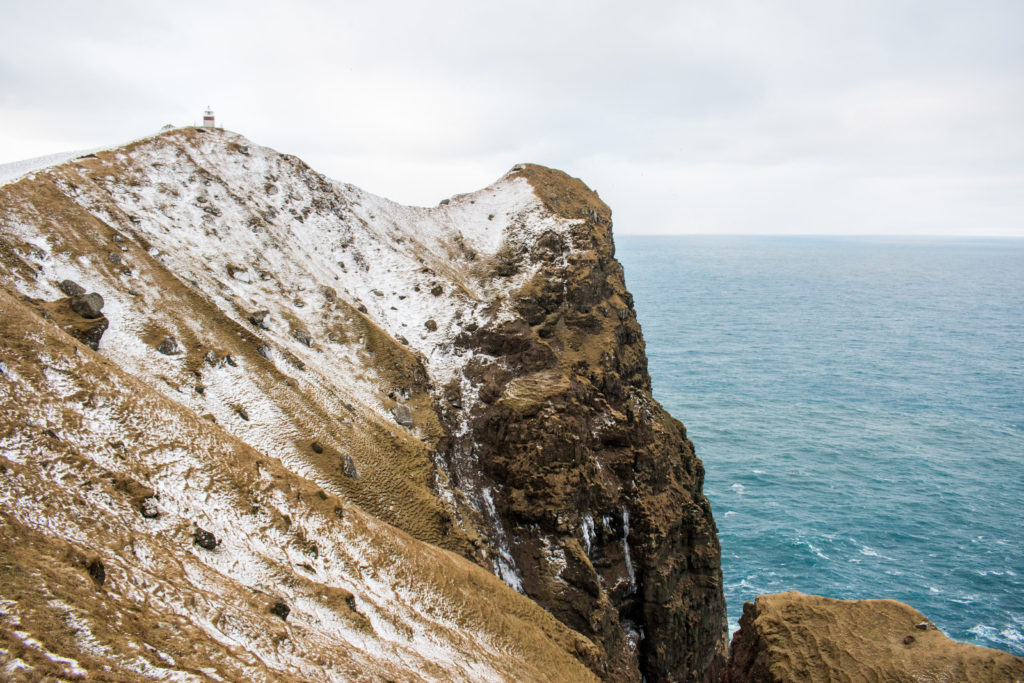 We arrived back at the car feeling completely exhausted. After a short walk through Trøllanes we set off for the village of Mikladalur, which we had already passed on the way. A light snow began to fall as we made our way cautiously down a long set of icy stairs. At the bottom, amidst crashing waves on jagged rocks, lay a statue dedicated to the Legend of the Selkie. Mikladalur has an old legend that seals are former humans, and once a year they are allowed to come back on land, strip off their skins and enjoy themselves once more as humans. 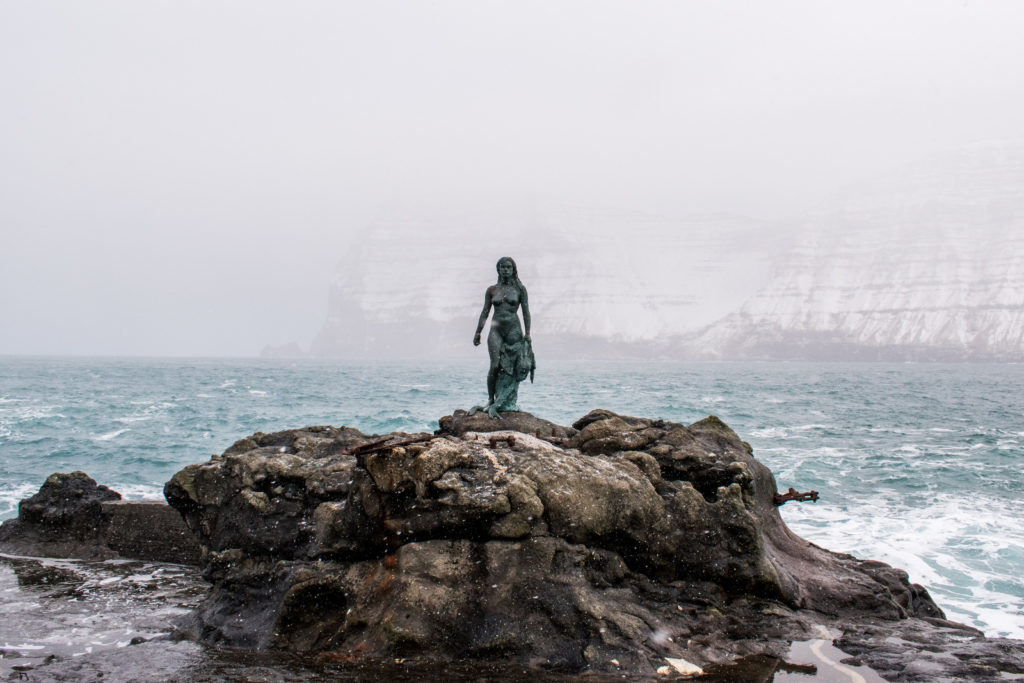 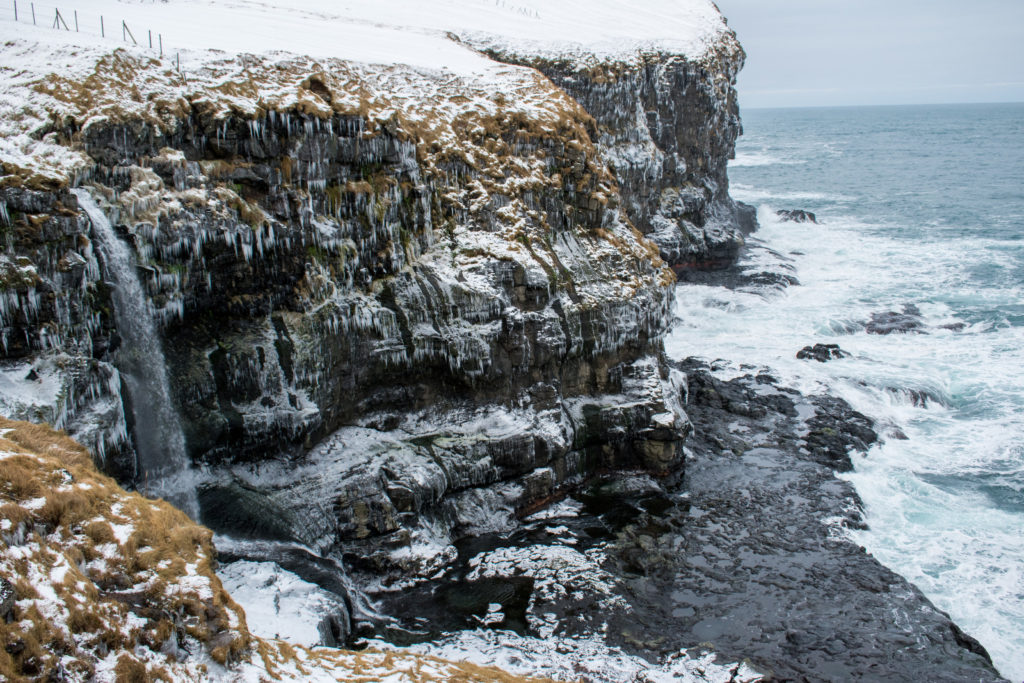 We sat in the warmth of Fríða, the best cafe in Klaksvik, sipping lattes and eating slices of carrot cake. Each lost in our own thoughts, we reflected on the amazing places we had just seen and wondered if we would ever lay eyes on such raw natural beauty again. We then set off for Hvannasund, where we were to spend the night at another house we had found on Airbnb. 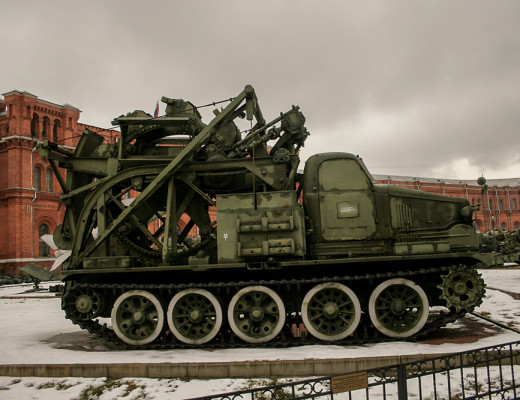 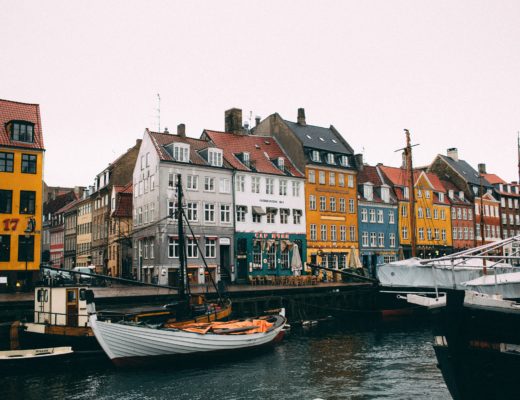 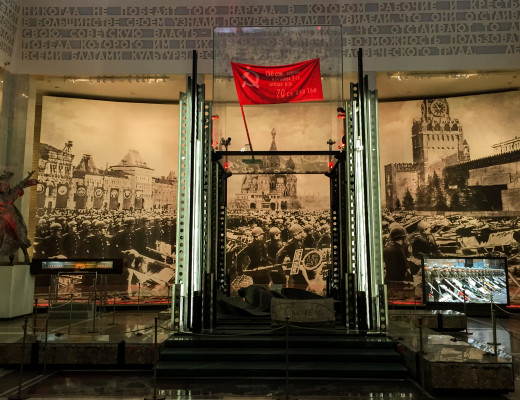