The Dutchman and I wanted to check out an abandoned hospital on the outskirts of Moscow. We had been watching Ross Kemp’s gangs documentary and had seen him investigating this ultra-nationalist group who used the place to train and do God knows what else. It was probably not the safest place to go but that’s how memories are made. You couldn’t get there by metro and had to catch a commuter train and then find your way on foot. If you thought catching the Moscow metro was an experience, then you were in for an adventure when you hopped on one of these trains. We arrived at the station and as usual it was chaos with huge lines and an endless monotone announcement over the loudspeaker which made you feel like you were in a WW2 movie. After figuring out which train we needed to catch we then realised that instead of buying tickets people were just rushing the platform en masse. It was quite amazing, there were not enough security guards to stop them and they just stood there watching, completely powerless. It was like when you see soccer fans rush the field at the end of the game. The only gamble was not knowing what the station at the destination was like and if you could get out without having a ticket. 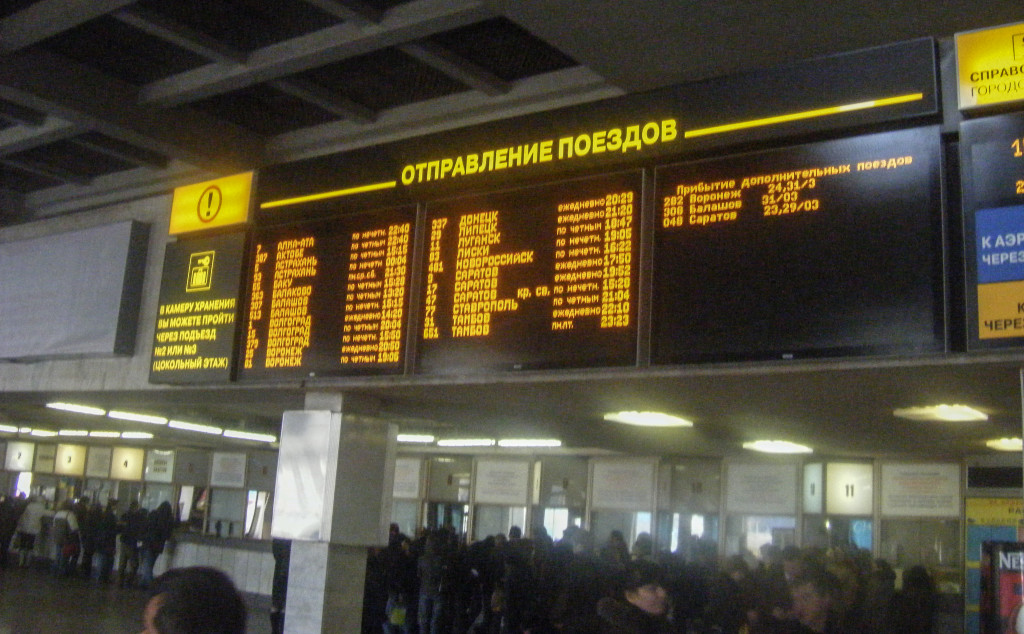 Some interesting destinations on the departures board at the train station in Moscow. Baku in Azerbaijan amongst others

On the platform we saw a bunch of Russian soldiers, most likely conscripts being sent off on their one year mandatory posting after their basic training. I felt sorry for them remembering all the stories I had heard about the hazing rituals they may face from the more senior conscripts. We made our way to a carriage and sat down, the carriages were a bench style with the two 3-seaters facing each other arrangement. The carriage started filling up and all of a sudden a large procession of various salespeople started making announcements at one end of the carriage advertising various products such as woman’s stockings and bottles of beer. After their little spiel they would make their way down the aisle hoping that someone would make a purchase. I imagine it would be a tough gig jumping trains all day with a big bag of random items trying to make sales. 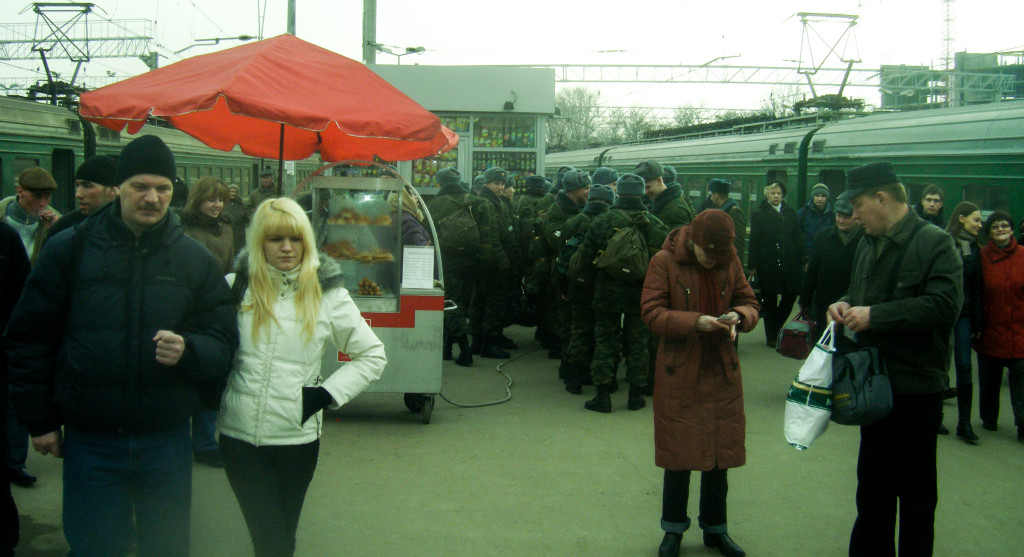 Russian conscripts on the platform in Moscow

The carriage had become quite full and it was now standing room only. The Dutchman was telling me a story about when he was working as a Geologist in Kazakhstan when all of a sudden a brawl erupted. It was in the seat across the aisle from us. It was hard to make out what was happening or what it was over, but other passengers were getting shunted and pushed out of the way with that unstoppable force a fight seems to have. One of them then yelled out “vidish sumku!!?” which meant “didn’t you see my bag?” It become clear that the bloke had reserved his seat with his bag to chase one of the beer salesmen that had gone past and another fellow mustn’t have seen it and sat down. Why you would leave your bag unattended on a crowded train and how that started a fight I’ll never know. As quick as it had started it was all over and the poor fellow walked away with a shocked look on his face. He was wearing one of those Windsor caps which was really popular at the time.

The train was now quite far from Moscow and the passengers had started to thin out. I guess no one else wanted to visit the abandoned hospital. Eventually the Dutchman and I and a lone woman were the only ones left in the carriage when a rather unusual situation unfolded. The train slowed down to stop at a station so I thought I would stretch my legs and go and stand by the doors as they opened to get a better view of the platform. A lady with a bag of groceries was also standing there as she was about to get off. It was then that about a dozen rather dark looking women scrambled into the carriage all at once. They almost looked Indian and had similar kinds of coloured robes that Hindu women wear. One of them pulled the lady’s grocery bag down slightly and dove her head down into it sniffing around like a curious dog. The lady quickly dashed out of the carriage and away from the mob, they all walked passed me and went into the carriage. I followed them and sat back down with the Dutchman. It then all made sense, he told me that they were gypsies and were not the kind you see in Western Europe, these ones were 10 times more deranged and cunning.

They employed all sorts of trickery to try and get money out of you, including putting an eye patch on their children making them looked disabled and sending them around markets to beg. Russians are very superstitious and believed that they were able to cast spells on people which resulted in them sometimes visiting a church to be blessed after an encounter with one. The Dutchman told me not to look in their eyes as they wandered around, as if he too believed in their powers. They left us alone but a few of them went and sat with the remaining lone woman, she kept telling them to leave her alone, I felt like intervening but after a while they left. I wanted to take photo of them but the Dutchman advised me not to, he said they might see me and have a pack of male gypsies waiting at the next station or in another carriage and that they would certainly outnumber us. I was surprised that in a country with so many aggressive ultra-nationalist groups that such roving bands of gypsies would even exist.

We arrived on our stop and realised people were just jumping down onto the tracks and walking off simply avoiding the not having a ticket issue and bypassing the station building altogether. The Dutchman asked for some directions which required us to catch a minibus referred to as a mushrootka. You would all pile in and just pass the fare up the aisle which was eventually given to the driver. As we sat there we noticed two young guys in matching white shirts and trousers staring at us. One of them then asked us where we were from in perfect English which gave us quite a shock. It turned out that they were Mormons and had done a lot of travelling in America as a part of their overseas assignments or whatever it is they do.

Finally we made it to the hospital, it was massive. It wasn’t even a finished hospital as it had been abandoned halfway through construction. The whole place was overgrown and crumbling, even the crane was still there as if they were waiting for a union dispute to be over so they could recommence work. We noticed someone staring down at us from the roof, I waved, but they didn’t wave back which I think is the universal sign for “fuck off”. There were a few houses around but it was mainly just open fields. We walked around the complex for a while and through a few of the ground flows, but decided not to stay too long and go up to the roof as we didn’t have armed bodyguards off camera like Ross Kemp did. 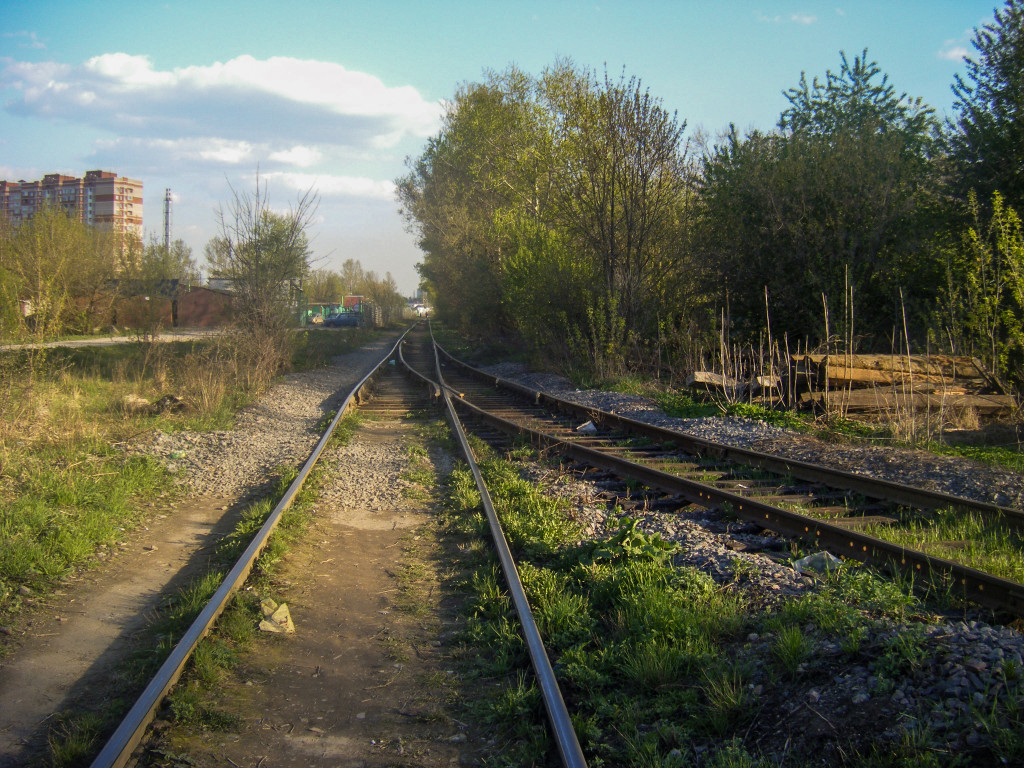 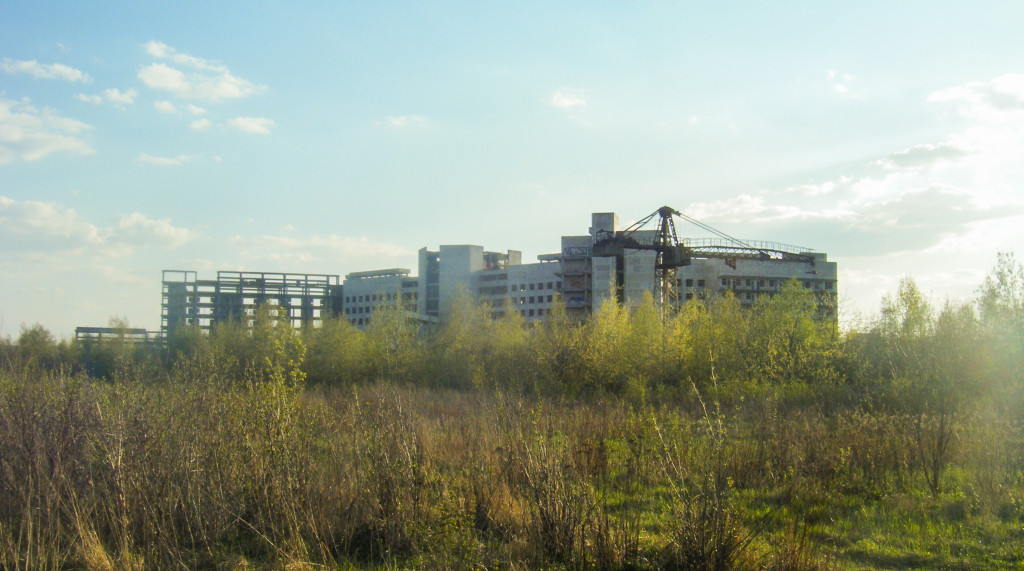 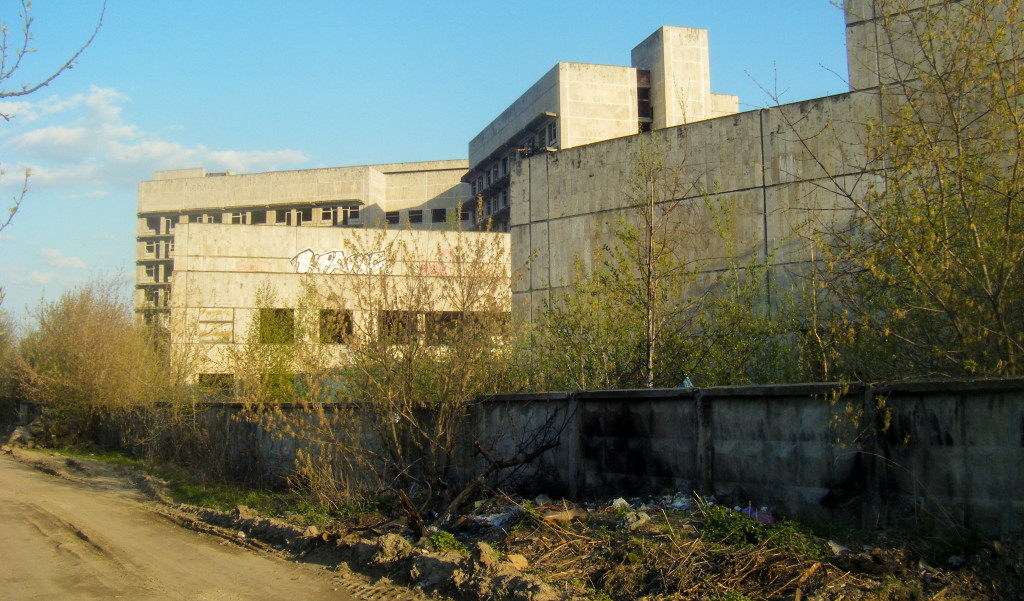 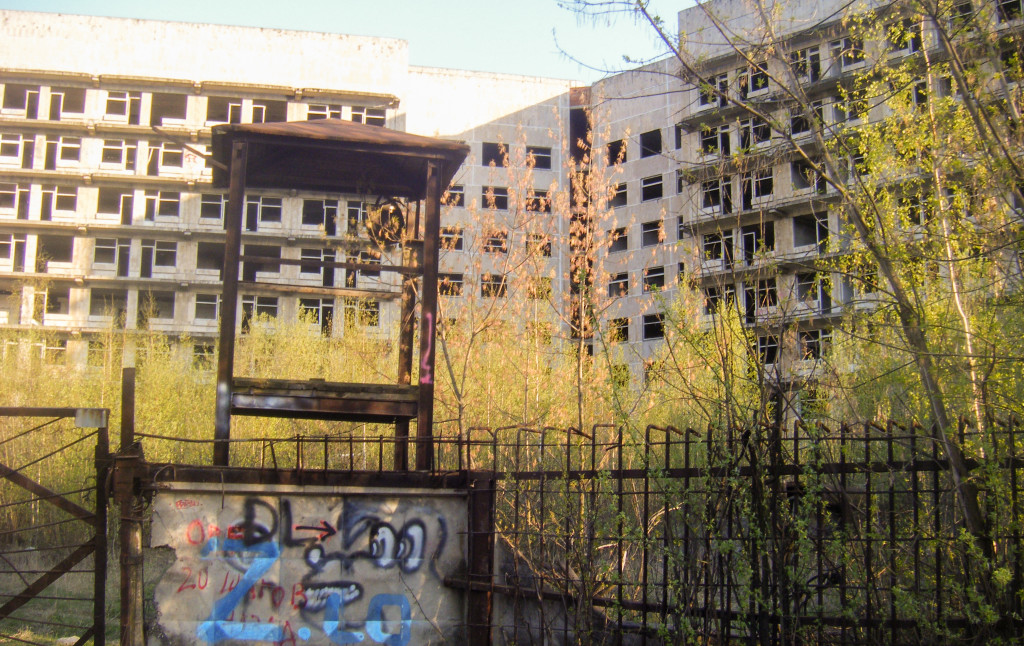 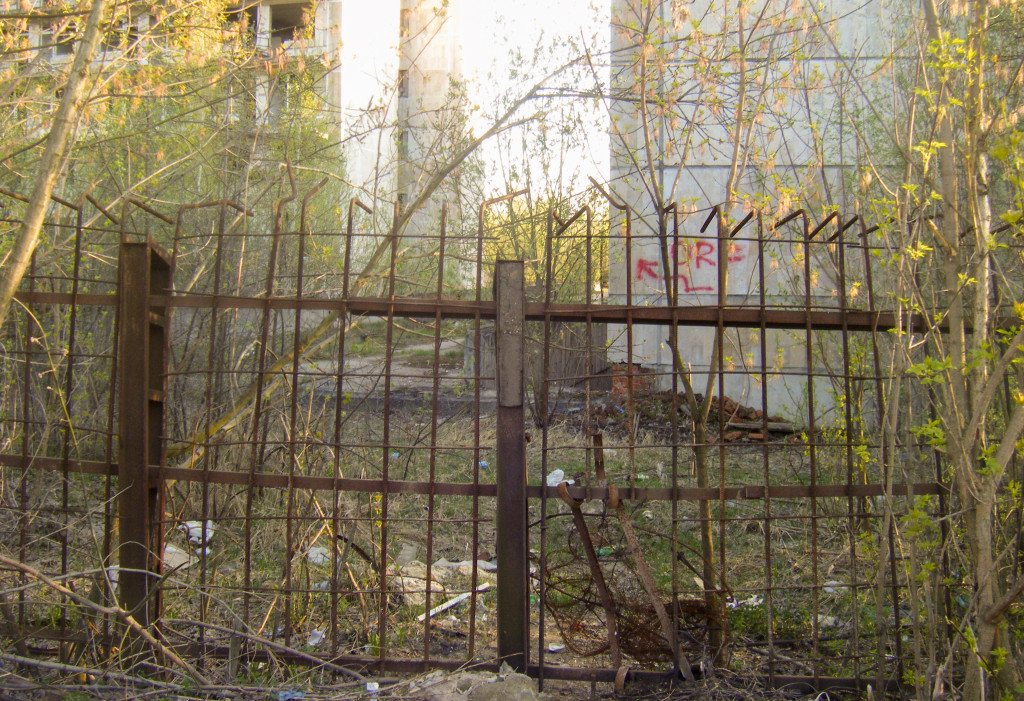 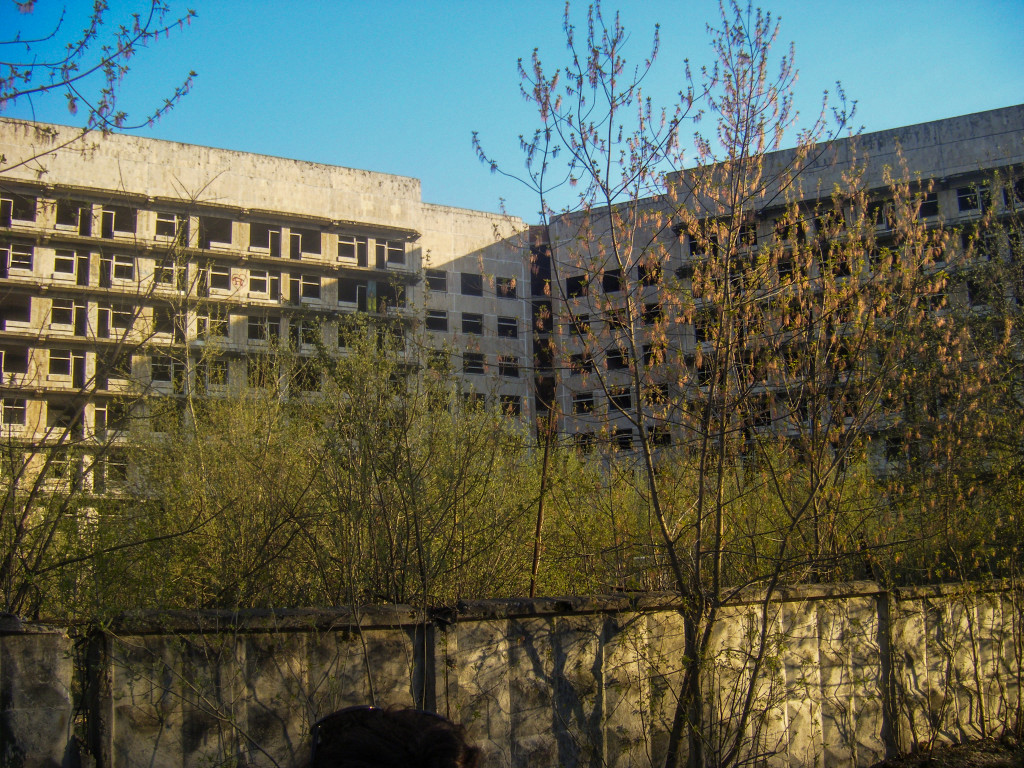 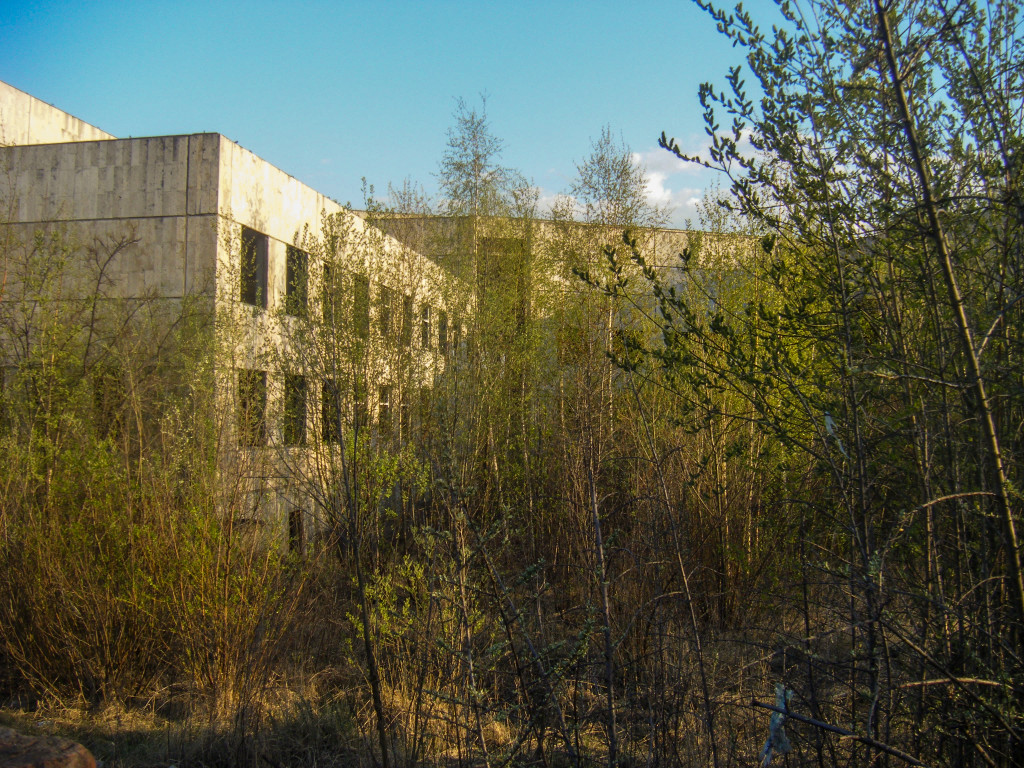 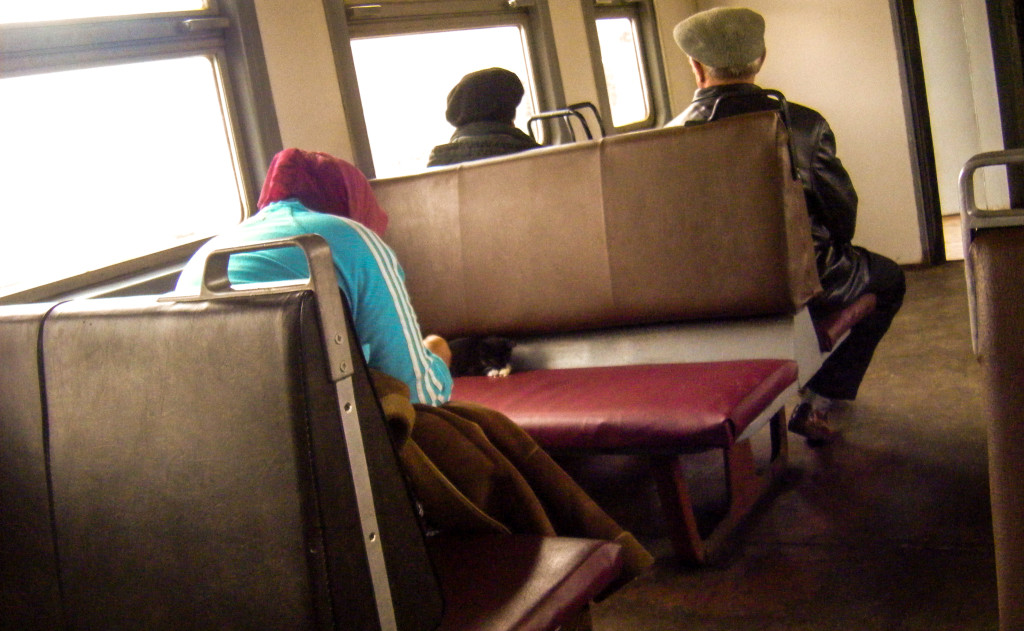 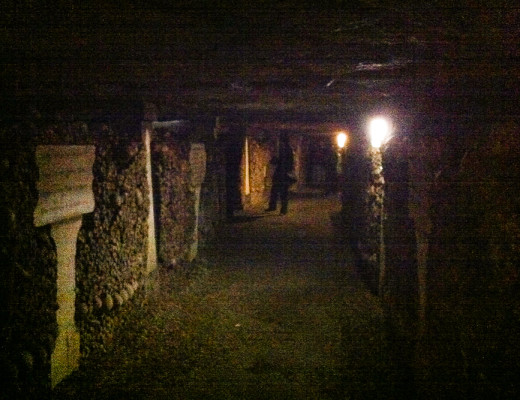 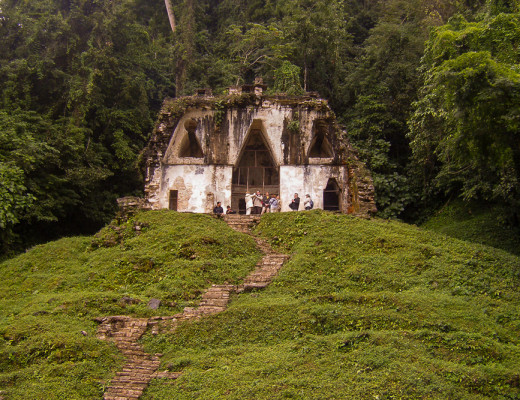